You turned a year and a half old today. Didn’t get much video, but it was a fun day. We went to the gym, and you felt much better about being dropped off in the Kid Center than you have before. You tripped and fell and scratched your face on the bedroom door, and I realize I’m writing this down because your mom and I feel bad about that, but you’re going to trip and fall and stumble a lot, and we’ll all learn how to deal with it, you’ll take the time you need to cry or fuss and get better, and we’ll move on from it.

You’re such a joy, kiddo. I can’t wait to experience the next 18 months with you.

This one time in college, a classmate in my college theater department made a particularly cruel joke at my expense one night during notes after a play rehearsal. I was zoned out, lost in my own world, and I didn’t hear what he said. What’s more, I didn’t even hear the collective gasp of everyone in the room who did.

Afterwards, another classmate came up to me and complimented me for not reacting, saying that he would have punched the guy for what he said if he were in my shoes, and in fact, he wanted to go punch that guy right now on my behalf. Once we cleared up the confusion over me not having heard what was said to begin with, I asked him to tell me. He opened his mouth to do so, but thought better of it and stopped himself.

Sixteen years later, I remember that conversation and the lesson from it, although I still sometimes have a difficult time following it.

Often in life, we find ourselves in situations where we feel the need to share someone’s hurtful words. Sometimes, yes, it is necessary. More often, though, it isn’t. More often, I think our underlying, unconscious intention is to make the other person feel the same hurt or anxiety or anger we have ourselves over what was said, even if we don’t fully realize that’s what we’re doing.

We are hurt, and we want others to hurt. It’s not right, but it is human.

I had a co-worker a few years ago who let me know one of our colleagues was mocking me behind my back. I had used one particular word – “Hubris” – too many times in a conversation that day for his liking, and so he had sent her a snarky chat message pondering whether I had a “Word of the Day” calendar, and if “hubris” was it for this day.

In the moment, I was grateful she had shared that with me, I guess, so I could be on guard around that co-worker. After she and I no longer worked together, I realized there were a number of occasions like that between us – her reporting what others were saying about me (it was one of those work environments where people often spoke badly of other behind their backs, and I probably was just as bad as others, sad to say), and I wondered if there was ever an instance where it was really necessary for me to be told what was being said.  I’m sure she had the best of intentions. But her net impact was to hurt my feelings using others’ words.

A couple of years later, I found myself in a different work setting that was certifiably toxic. The owner/head of the company and the head of staff would speak to everyone in the company about how they were unhappy with a certain person apparently on the verge of being fired, but not actually speak with that person about the issues that needed to be addressed. It created an environment where everyone was “looking out for each other” by letting each other know what the bosses were saying about them, but also, everyone was wary of each other as well. More than once, I felt like a colleague was giving me a heads up about what was being said about me not so much to help, but to rattle me.

Everyone was unsure of the stability of their jobs from day to day, and we sometimes exacerbated that feeling in each other.

I often told myself to be aware of the fray, but stay above it. It was a smart goal. I never did manage to accomplish it. I was relieved to hear when the bosses were targeting a co-worker, because it wasn’t me, and those things typically happened one at a time.

I worked at that place for a couple of years, and I had to leave when waking up at 4am with wrenching anxiety dreading the day ahead of me was a daily occurrence.

Here’s something else interesting about that time: In those months of being stressed and scared working at this place, I was absolutely obnoxious on social media, constantly mocking and deriding people I disagreed with politically and culturally. (These were the months leading up to the 2012 presidential election, Obama versus Romney.) I was so obnoxious, in fact, even people who agreed with me ideologically removed me from their friends lists to escape my vitriol.

I have no doubt social media is just as much as pervasive in our culture when you read this as it is now. More than ever in our current political climate, people share others’ hurtful words with the intention to inform and perhaps inspire a call to action, but their net impact is hurting others. Don’t get me wrong. It’s important to stay informed. But there’s a line between thoughtfully bringing something important to others’ attention, and sharing something so others can share in your outrage.

It’s hard to see that line. You’re going to get it wrong sometimes. I still get it wrong.

Another thing to keep in mind: There’s going to come a time when you are the one who says something hurtful. In today’s world, it’s likely many people will hear about and read what you’ve said. It will be embarrassing, and it will probably have consequences. There will be those who rush to publicly shame you. You will need to deal with that situation with integrity.

If it’s something you’ve said on social media, there might be those who say you shouldn’t delete your words. That you should leave them online as a lesson for others, and for your own growth, or something.

Listen to me, son: That sentiment is nonsense. If you post something hurtful, intentional or not, once you’ve thought better of it, or once you’ve learned why something you’ve said was thoughtless or cruel, not only is it okay to take those words down, but it’s the responsible to thing to do. Don’t run from what you said. Apologize individually to those hurt. Apologize publicly. Take responsiblity and accept the consequences. But take what you said down so people aren’t looking at it and sharing it, and thus, hurting even more people.

(In all likelihood, someone will have grabbed a screen capture, and it will still be shared. But you will have at least tried to mitigate the hurt you may have done. Also: I feel weird talking to you about things like screen captures, but I’m sure you’ll know what those are by the time you’re age three.)

When people share others’ hurtful words, their intentions may be good, but they are at risk of causing pain.

I was driving to pick you up from daycare the other day, and I saw a mural in our neighborhood for the first time: 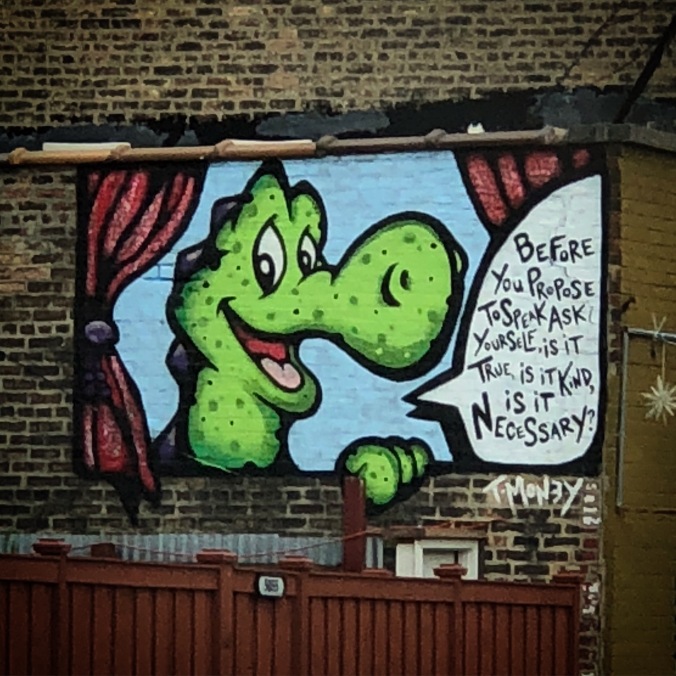 I think that’s the best way to express what I’m trying to say. “Before you propose to speak, ask yourself: Is it true, is it kind, is it necessary?”

Remember all three, but really focus on those last two requirements: Kind, and necessary.

Just because something is true, it doesn’t mean it deserves to be repeated.